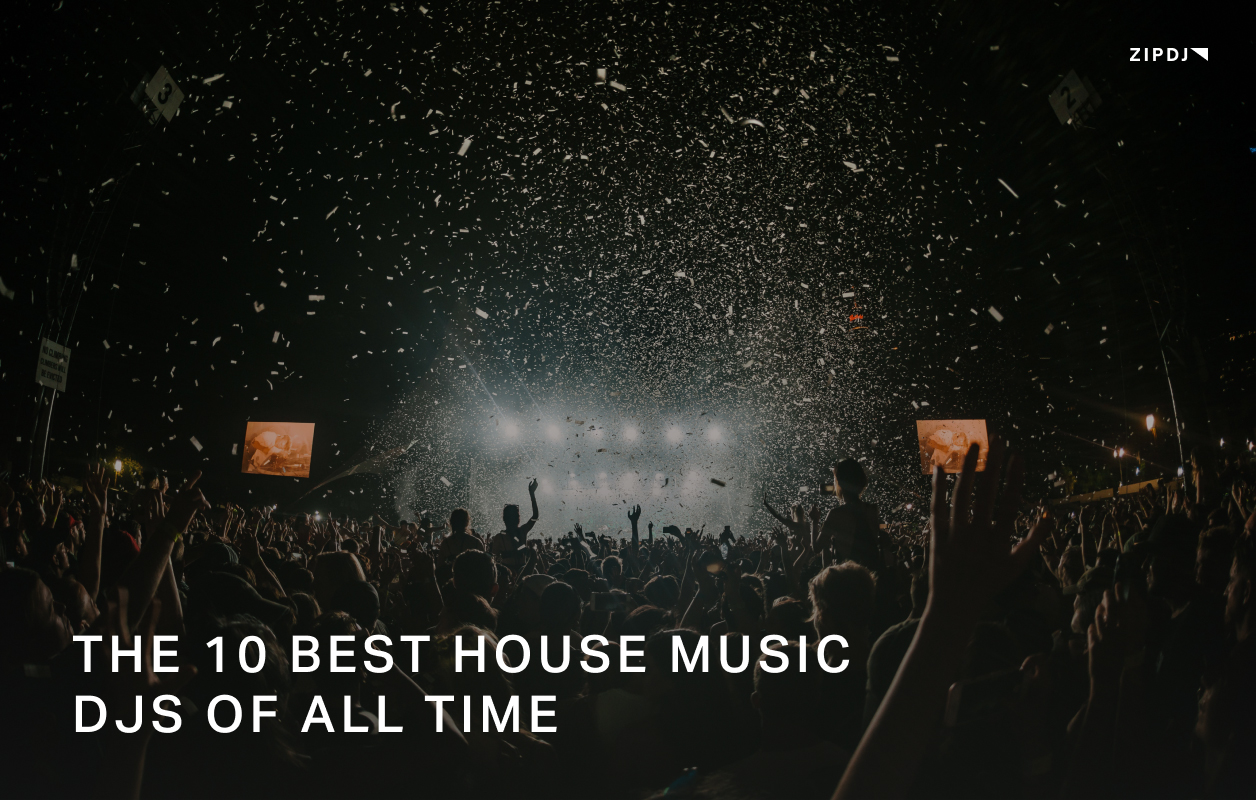 The best house music DJs have shaped the future of dance music, pioneering DJing techniques and pushing the genre with tracks that rock the dancefloor.

House music has evolved from its disco roots to incorporate a range of other genres, continually changing as more DJs bring their take to the table.

This article will cover the DJs who have contributed to the genre, performing at the world’s best clubs while developing their own unique sound.

The 10 Best House Music DJs of All Time

We’ve explored the history of house music to guide you through the most iconic house DJs of all time, covering the residencies and remixes that helped earn their reputation.

Without further ado, here’s our list of the best house music DJs of all time:

While New York and Chicago are rightly viewed as the epicenters of early house music, London-based DJs placed the UK firmly on the map in the early years of the genre’s growth.

“Evil” Eddie Richards was one of the original house DJs pioneering house music from as early as the mid-1980s, performing regularly at London’s Camden Palace.

His DJing style takes the fundamentals of beatmatching and transforms them into complex mixes that integrate drum machines and other cutting-edge technology.

Richards went on to blend house music with acid house, defining the emerging subgenre of tech house by introducing techno elements to his sets.

In addition to his regular Wiggle house parties, Richards would work closely with Mr. C, founder of the End nightclub and associated record label, pushing tech house to an international audience.

Later in his career, Richards would take these techniques to the next level, focusing on music production for a broad selection of house music record labels.

As a guest DJ for Fabric and a prolific remixer and producer in his own right, Eddie Richards has left a lasting legacy on the world of house music.

Aspiring DJs looking for contemporary inspiration should look no further than Calvin Harris, one of the leading lights in modern EDM, whose club music draws heavily on the house genre.

With an eclectic approach to his live sets, Harris draws upon many of the essential DJ techniques you need to master to take your audience on a journey.

His DJing career took off in 2011, with Harris supporting Rihanna on her international tour and serving as the house DJ for the MTV Music Video Awards the following year.

Harris is a regular fixture on the main stage at the world’s most popular festivals, including Coachella, Lollapalooza, and the iHeartRadio Music Festival, earning tens of millions each year.

As well as being one of the most popular house music artists of his generation, he’s also a prolific music producer, surpassing Michael Jackson for the most top ten songs from an album in 2014.

Over the past few years, Calvin Harris has seen his reputation continue to grow, becoming one of the highest-paid DJs in the world, with sell-out tours at the biggest music festivals worldwide.

No exploration of the most popular house music artists of all time would be complete without Larry Heard, whose work under the moniker Mr. Fingers helped to define the genre throughout the 1980s.

Heard’s journey began at the dawn of house music with the aspiring DJ working with drum machines and synthesizers and connecting with the burgeoning club circuit in Chicago.

In 1986, Heard released the iconic single, Can You Feel It, ushering in house music as a bridge between disco and futurism and forging a new sound called deep house.

With more singles to follow, Heard took his unique sound to various clubs around the States, collaborating with Robert Owens and producer Ron Wilson to bring house music DJs to a broader audience.

As the leader of the group Fingers Inc., Heard continued to push house music into the popular consciousness with the first long-form house LP, Another Side, released in 1988.

Notable for his smooth DJ sets featuring lush vocals and a jazzy undercurrent, Heard’s iconic performances from the 1980s have inspired countless house music DJs in the years since.

Like Heard, Masters at Work got in on the house music act early, performing live DJ sets and producing music in the 1980s, going on to help create the speed garage genre in the 1990s.

Masters At Work understood how to build a DJ brand, beginning their career playing at block parties before collaborating with some of the key house music producers of the era.

Comprised of the duo Kenny Dope Gonzalez and Louie Vega, Masters at Work initially played hip hop in the Bronx before moving onto house music following an encounter with Todd Terry.

This experience paved the way for a successful run of house music productions matched by their increasingly popular DJ sets at some of the most prestigious nightclubs in America.

In the studio, Masters at Work collaborated with some of the most popular singers in the world, including Madonna, Michael Jackson, and Donna Summer.

Often referred to as the most influential duo in the history of house music and credited with the creation of the golden age of Latin House, it’s impossible to understate their impact and legacy on the history of dance music.

Chicago has long been the birthplace of house music, and many of the greatest house DJs and producers have made a name for themselves in this vibrant city.

Derrick Carter was born in Compton, California, but shortly after moved to the suburbs of Chicago, where he began practicing his DJ skills in his bedroom as a teenager.

By the late 1980s, Carter had become a key player in Chicago house music, working with DJs such as Mark Farina and Chris Nazuka to drive the underground house scene forward.

The influence of Carter’s unique approach to house music, which saw him draw upon jazz, old-school disco, and soul, extended well beyond American house music.

By the 1990s, his music was impacting the United Kingdom, particularly the emerging ambient techno genre, bringing him a broader, international audience.

Responsible for some of the best DJ sets of all time, Carter earned a reputation for taking house music to new heights and defining what became known as Jackin’ House during the 2000s.

The best house music DJs have established their status through decades of experience, and Danny Tenaglia is a perfect example of a living legend who has been involved in house music since its inception.

Collecting records from childhood, Tenaglia began attending the Paradise Garage nightclub in New York in the late 1970s, where DJ Larry Levan introduced him to mixing.

By the mid-1980s, Danny Tenaglia had made a home for himself in Miami, performing sets alongside some of the most prominent house DJs as a resident at the Cheers nightclub.

After finding mainstream success with his remix of The Daou’s track Surrender Yourself, he branched out from DJ sets and worked as a producer on remixes for artists including Madonna, Jamiroquai, and Right Said Fred.

Tenaglia’s prolific career has seen him pick up multiple accolades, including Best International DJ at the International Dance Music Awards on three occasions.

Danny Tenaglia plays the kind of house music you’ll find when signing up to ZIPDJs record pool, an eclectic mix that reflects the genre’s best.

Another of the world’s most iconic house DJs to have emerged from the Chicago scene is DJ Sneak, who started as a mobile DJ at various nightclubs in the city.

Influenced by the warehouse party scene that defined Chicago as a leading city for house music, Sneak took his sound in new directions, inspired by the likes of Steve Hurley and Farley Jackmaster Funk.

By the 1990s, Sneak had built a solid reputation behind the decks, renowned for his driving; four-to-the-floor mixes tailored to the dancefloor.

Sneak’s repertoire of the best DJ tips and tricks is extensive, and aspiring DJs can learn a great deal about the craft by studying his sets.

His approach to the genre reflects his far-reaching range of styles, combining the jackin’ house music familiar to fans of Derrick Carter with acid tracks to forge an entirely new sound.

With his collaborations with Green Velvet securing his reputation worldwide, Sneak has DJed at venues including the Ministry of Sound, Cream, and Manumission.

French electronic music duo Daft Punk was formed in 1993 by Thomas Bangalter and Guy-Manuel de Homem-Christo, becoming one of the most influential acts to emerge from the French House movement.

After disbanding their earlier indie rock band project, the pair began experimenting with drum machines and synthesizers to take their music production in a new direction.

As their reputation for music production developed, particularly with the release of their album Homework, Daft Punk also impressed crowds with some of the best DJ visuals on the house music scene.

Few house DJs have had such a lasting legacy in the music industry, and Daft Punk has appeared on many lists of the best house music DJs of all time.

This includes being ranked No. 2 on Mixmag’s Greatest Dance Acts of All Time and various Grammy and International Dance Music Awards.

House music’s historical roots in Chicago began well before Derrick Carter and Sneak began performing at the city’s leading venues, with Ron Hardy, a key player in its origins.

A leading light at the gay nightclub Den One, Hardy was one of the original DJs to set up two turntables and a mixer to perform lengthy all-night sets of underground dance music.

By the early 1980s, Ron Hardy had teamed up with Frankie Knuckles, whose nightclubs, the Music Box (formerly the Warehouse) and Power Plant, provided the perfect space to show off his talent.

Whereas Frankie Knuckles was noted for his smooth mixing style, Ron Hardy preferred to go hard and fast, cranking up the BPM to give his house music sets a tempo more akin to techno.

His emphasis on heavy basslines, driving beats, and pounding energy soon caught the attention of his contemporaries, with Marshall Jefferson among the many house music DJs who championed Hardy’s style.

Ron Hardy’s entry into the world of house music wouldn’t have been possible without the influence of Frankie Knuckles, and the style took its name from his iconic nightclub, the Warehouse.

During the late 1970s, Knuckles worked as a DJ playing sets infused with soul, disco, and R&B in New York, before moving to Chicago and becoming a key player in the development of the Warehouse.

As one of the founding artists of house music, Knuckles introduced the world to many of the DJ transitions still used by today’s most skilled house music DJs.

Over the following decades, Knuckles worked with many great artists, partnering with David Morales on Def Mix Productions and reworking songs by Michael Jackson, Diana Ross, and Luther Vandross.

Frankie Knuckles sadly passed away in 2014, and while fans can no longer hear his mixes in their intended nightclub setting, his impact on the world of house music will be felt for years to come.

So that wraps up this complete guide to the best house music DJs of all time and the iconic tracks and residencies that helped them establish their worldwide reputation.

With so many great house music DJs to choose from, honorary mentions go to Tony Humphries, Junior Vasquez, and David Morales, each of whom has also played a role in the genre’s evolution.

As house music continues to change with the times, we can anticipate more iconic house music DJs emerging in the years to come.

Access a complete library of the best house music when you sign up to ZIPDJ and take your DJ sets to the next level.