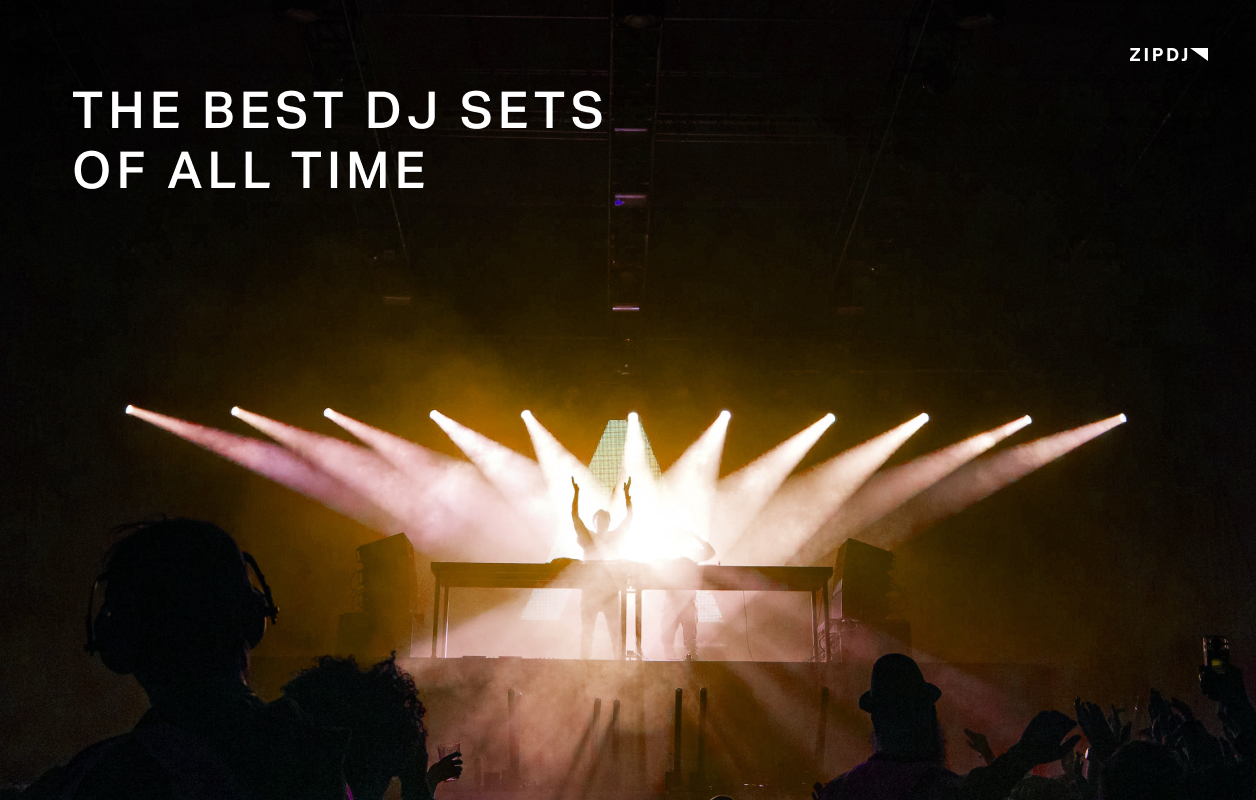 The greatest DJ sets of all time showcase various skills, from technical aspects such as DJ transitions and scratching to the unseen art of track curation and arrangement.

Continue reading, and we’ll break down the most impressive and iconic DJ mixes to have emerged over the last few decades, guaranteed to liven up a packed party.

The 10 Best DJ Sets of All Time

A great DJ set stands as a showcase for what a DJ is capable of, reflecting their unique approach to live mixing and their technical skill and proficiency.

We’ve selected mixes that reflect this combination of skill and taste and remain firmly embedded in the art form’s history to this day.

So let’s get started and run through our list of the ten most iconic DJ sets of all time:

The greatest DJ mixes have all stood the test of time, remaining as fresh and invigorating today as they were when they first played to a crowd.

Few DJs have helped to shape club culture as Carl Cox, whose commitment to remaining at the forefront of techno and house music has made him a true legend.

His DJ mix for BBC Radio 1’s Essential Mix in 1994 offers a masterclass in DJ set construction, with the opening track by Green Velvet starting as he means to go on.

Cox’s first of many mixes for the radio show, it’s a driving blend of house and techno featuring tracks from some of the leading producers of the mid-1990s.

Deep house and techno are complemented with snatches of funk and disco, all underpinned by a relentless bassline and driving beats geared entirely towards the dancefloor.

Carl Cox remains at the forefront of electronic music, with one of the best DJ websites showcasing his prolific output and cutting-edge mixes.

A great DJ knows how to work with a broad range of genres, whether mixing hip hop and drum and bass or blending UK garage into deep house.

2ManyDJs took things to the next level with their As Heard On Radio Soulwax Vol. 2 mixes, playing tracks you wouldn’t expect to hear from most DJs.

The Ghent-based brothers tackle popular dance music from artists like Felix Da Housecat and Royksopp, throwing in some of the best singers of all time, including Whitney Houston and a dash of Dolly Parton.

While on paper, you might question how – or indeed if – this would work but in the hands of these master DJs, what emerges is one of the catchiest DJ mixes of all time.

Throughout the mix, a variety of DJing mixing techniques are deployed to keep the music driving forward, from easy DJ transitions cutting from one track to the next to more complex mixes.

It’s a tuneful, vocal-driven mix that integrates key moments from disparate points in music history, cutting and pasting together some truly unique sounds.

If you’re interested in listening to a great DJ set that encompasses decades of hit tracks alongside the best underground music of the era, you won’t be disappointed with this.

Joris Voorn’s Balance 014 is about as far removed from the traditional turntable mixing from 2ManyDJs as you can get and reflects the changing technology used to create a killer DJ mix.

With vast creative freedom from the Balance brand, Voorn goes beyond basic DJ mixing and utilizes various music production techniques throughout the set.

Released in 2009 on a double CD, the tapestry-like approach to the mix’s construction captures the essence of the expression, “painting with music.”

Voorn remains firmly rooted in the underground scene, with much of the mix dedicated to obscure releases blended with layered sounds instead of basic transitions.

It’s a mix that simultaneously showcases the exceptional music curation skills of Joris Voorn and the futuristic tech house sounds emerging on the cusp of a new decade.

Along with Pete Tong, Sasha and John Digweed helped push UK garage and house music into the spotlight throughout the 1990s, delivering many amazing DJ mixes over the years.

Perhaps the most iconic of the many DJ sets from Sasha and John Digweed is their mix collection for Renaissance, taken from a live recording in 1994.

Widely regarded as the benchmark for mixing, it’s a fresh and energetic display of DJing bravado, complete with effortless transitions from each track to the next.

Their Renaissance mix cemented how to beat match in the mind of every DJ working at the time, delivering solid four-to-the-floor dance music anthems.

The duo had a strong reputation throughout the decade as pioneers of the art form, inspiring thousands of clubbing enthusiasts to try their hands at DJing.

Their Renaissance mix features tracks from cultural phenomenons such as Leftfield and Inner City, encapsulating the best music the mid-90s had to offer.

While most contemporary DJs use controllers and digital files for their sets, DJ Shadow and Cut Chemist showcase what can be achieved with the best DJ turntables combined with a lot of practice.

Brainfreeze exemplifies the full potential of what can be accomplished if you learn how to scratch DJ, mashing up various genres with exceptional skill and panache.

Breakbeat, old-school funk, hip-hop, disco, and other genres are all featured in this vibrant mix, with many tracks geared toward the party crowd.

Plenty of samples are also thrown into the mix for good measure, with kung fu movie dialogue and sound effects used by Shadow and Cut Chemist in their exemplary scratching.

Considered by many to be the last word in turntablism and a showcase for the two artists at the peak of their abilities, Brainfreeze is a tour de force DJ set that made history.

Few DJ sets have matched this for energy and genre-mashing style, with DJ Shadow and Cut Chemist serving up one of the most amazing DJ mixes you’re likely to hear.

Resident Advisor has played host to some of the best DJ mixes of all time, from Motor City Drum Ensemble to Basement Jaxx and Four Tet.

Nicolas Jaar burst onto the scene with a splash in 2008, releasing a series of techno tracks inspired by underground German techno and house.

In 2015, his hour-long mix for Resident Advisor, Mix 211, placed him firmly on the radar among all discerning electronic music fans, taking a low-key approach and delivering a DJ set full of nuance.

Jarr’s impeccable sense of timing and use of the best DJ effects has made him one of the greatest techno DJs working today, comparable to Carl Craig, Ricardo Villalobos, and Floating Points.

With Mix 211, Jaar unleashed a DJ mix that bounced from one genre to the next, mixing tracks from as far back as 1927 and underpinning them with solid bass and percussion.

It’s a masterclass in how to DJ mix like a professional, with Jaar’s consistent bravery and refusal to play it safe a perfect segue to his debut Space Is The Noise, released shortly after.

BBC Radio 1 Essential Mix is well known for playing host to a wide variety of DJs, with everyone from Frankie Knuckles to DJ Snake making an appearance on the show.

As you might expect from a producer who has released music through Warp Records, this essential mix is full of experimental tunes, so if you’re a fan of pop stars like Nicki Minaj, this DJ mix won’t be for you.

There are plenty of tunes from Flying Lotus himself featured in this mix, alongside notable producers, including Martyn, Mike Slott, Burial, and Clark.

It’s as unconventional a mix as you might anticipate from the Brainfeeder label founder, with more unusual sounds and details emerging with each new listen.

More recently, Flying Lotus has built a solid reputation for live shows featuring some of the best DJ visuals of all time and for directing the surreal movie, Kuso.

The DJ Kicks compilation series has been responsible for many outstanding sets, and Kruder and Dorfmeister’s contribution is a truly great DJ mix.

Whereas Playgroup and Carl Craig opted for more bass-driven club stompers, Kruder and Dorfmeister go for downtempo after club vibes.

Laid-back drum and bass tracks are featured alongside broken beats and trip-hop, serving as a snapshot for artists who formed the core of downtempo during the mid-to-late-1990s.

The mixing on show here is top tier, making it an essential mix for up-and-coming DJs looking for more tips and tricks to improve their DJ skills and show off during their next live set.

Roni Size and Alex Reece provide the heavy hitters, with Bomb the Bass and Depeche Mode taking the mix into familiar territory with more recognizable melodies.

Originally released in 1998 through Studio!K7, it is an expansion and progression from their previously released DJ Kicks session recorded in 1996.

If the BBC Radio 1 Essential Mix represents the pinnacle of dance music from the 1990s, Boiler Room DJ mixes have played a similar trend-setting role in recent years.

Featuring world-class DJs from the vibrant club scene in London, Europe, and beyond, fans can listen to Boiler Room sets online for free.

The Theo Parrish Boiler Room set from 2010, with its soul-inspired techno and driving bass, is as good as anything you’ll hear in a club today, every bit deserving of its reputation.

His sets are about as technically proficient as they come, featuring many of the essential DJ techniques you need to master, with effortless EQ control and blended mixing.

It’s another DJ mix that isn’t afraid to branch out into exciting new places, eschewing genre conventions and taking listeners from Detroit house and techno to jazz and disco.

Few DJ sets are as much fun as this, inspiring a sense of wonder at the possibilities DJs can explore if they’re prepared to step outside their comfort zone.

No overview of the greatest DJ sets of all time would be complete without a mention of Journey’s By DJ, Coldcut’s seminal work that paved the way for the DJ mix format.

Coldcut’s scattershot, chopped-up approach to their Journeys By DJ mix resembles the modern practice of making mashup songs as if captured from snippets on the radio.

With the apt tagline “70 Minutes Of Madness”, Coldcut proved to be way ahead of the curve with Journeys By DJ, mastering the application of samples to DJ mixes.

It’s a set defined by fun and experimentation, incorporating tunes from Masters at Work, Luke Slater, and Global Communication with Photek and Red Snapper.

Comprised of the duo Matt Black and Jonathan More, Coldcut would later go on to found the record label Ninja Tunes, publishing albums by many of the artists included on this mix.

As such, their Journeys By DJ mix can be seen as more than just a masterclass in technical accomplishment, but a prescient listening experience that foreshadowed Coldcut’s later revolutionary impact on dance music culture.

So there you have it, our complete guide exploring some of the world’s greatest DJ sets, from pounding house and techno mixes to eclectic, genre-hopping showcases.

Representing the best DJs have to offer, these quality mixes have stood the test of time and are adored by millions of fans worldwide.