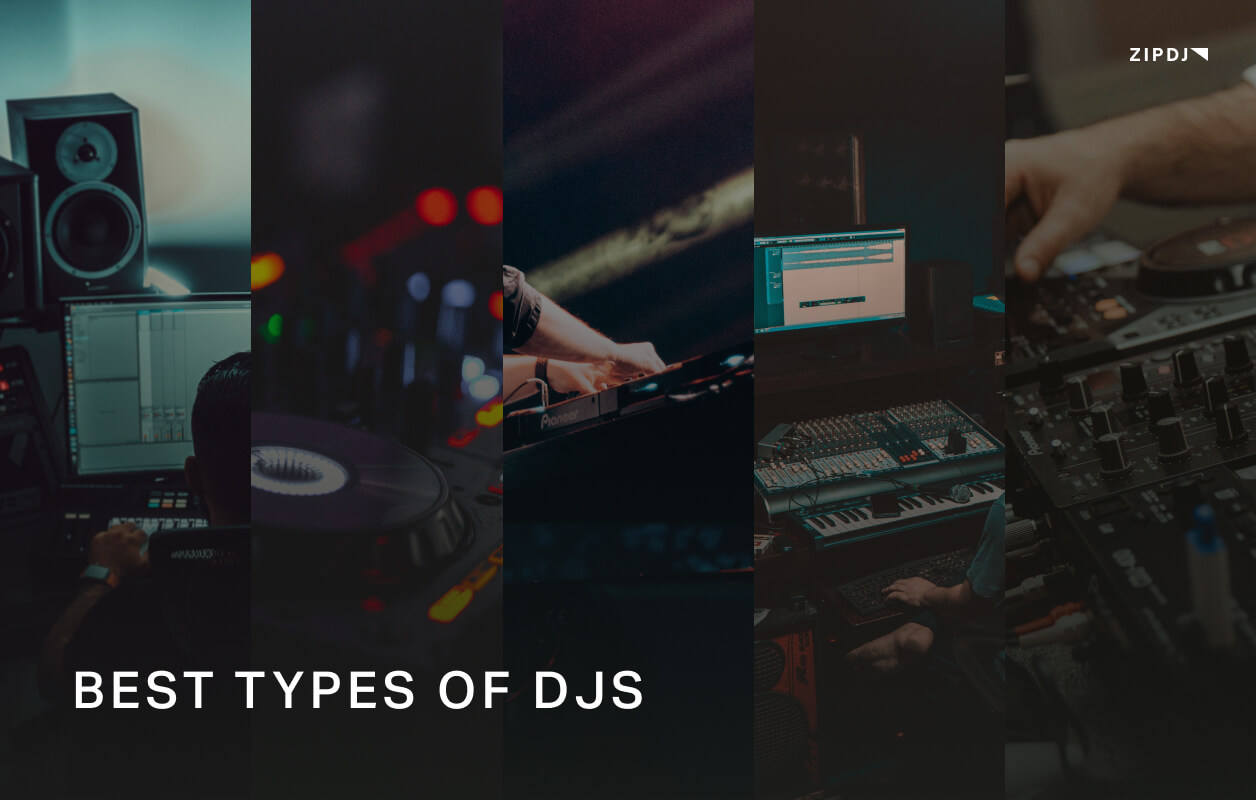 Modern DJ culture is no longer a basement sport for bedroom DJs.

High profiles, big checks, and increasingly bigger crowds have vaulted many DJs to superstar status, and there’s no denying the impact DJ culture has had on the music industry and pop culture.

The type of work we perform as DJs often puts us in one of five categories; club, radio, mobile, turntablist/scratch, and or DJ/Producers.

As with any art form, there will be crossover at the intersections, so in this article, we’ll look at each of the different types of DJs in detail to give you a better idea of what each one does.

Each type of DJ on this list has a particular style and strength, but as you’ll see, most modern DJs incorporate a little bit of each into their repertoire.

So, without further ado, here are the 5 different types of DJs in 2022:

This DJ category has grown in popularity over the last few decades. However, in reality, music production has always been a fixture of DJ culture, and DJs have been making dance edits and remixes as long as DJing has been commercially viable.

In the past, the megamix could highlight a DJ’s skills as a sequencer and composer. Think-Grandmaster Flash and Grandmixer DST (Herbie Hancock).

Most 80s and 90s rap featured the DJ as part of the music production team. Premier, Pete Rock, Jam Master Jay, and Dr. Dre were all DJs first and foremost before stepping behind the boards.

The DJ/Producer’s job has always been intertwined with dance and electronic music. Early techno and house DJs had to produce their own music to get their desired sounds. Jungle and DNB culture almost entirely revolved around the DJ/Producer as the centerpiece and catalyst.

For today’s producer DJs, technology has supercharged their sonic abilities. As a result, production levels are increasingly competitive, and young producers are challenging the very concepts of song structure.

Since you don’t have to rely on test pressing records to play your originals anymore, the pathway from music producer to the stage is more accessible than ever. Some DJ producers have gone as far as announcing they’ll only play original songs in their sets.

DJ culture is steadily growing, and so is the hardware and technology surrounding it. Software, such as Ableton, Traktor, and Serato, has made a massive difference for DJs playing original compositions or remixing them in real-time.

Today, it goes without saying that a DJ can also be a music producer, and the two go hand in hand if you’re a DJ that likes to create remixes and tracks of your own.

Turntablism looked to isolate the scratching, juggling, and sound manipulation aspects of hip hop DJing into its own genre and art form. Since it began, Turntablism has become less about mixing songs and more about creating new songs out of snippets, using the turntable as more of a musical instrument.

DJ Disc gets credit as the first to use the term, with Babu adding to its legacy of lexicon with an appearance in the 2001 DJ documentary, Scratch. Both national and international acts were featured in it, showcasing the popularity of turntablism and scratching worldwide.

Throughout the 90s, DJ crews like The Beat Junkies, Invisibl Scratch Piklz, X-Men (Executioners), the Scratch Perverts, and the Allies competed in contests like ITF and DMC championships, which are still the preeminent contests for turntablism, to claim the title as the best turntablist/scratch DJ.

Fast forward to the present day, and modern turntablists and scratch DJs have really upped their game with the explosion of technology and DJ equipment. Serato, Traktor, and other DVS (Digital Vinyl System) equipment now allow unlimited song selection and crate building.

A DJ can also now play with cue points to quickly reference a piece of a song or create new compositions. Customized scratch and juggle phrasing can also be planned and made ahead of time and uploaded as digital files.

Cue point buttons and DJ-created files allow for unique samples and sounds to be quickly accessed for tricks and showcases, which wouldn’t be possible to perform on vinyl only.

So, although turntablism and scratch DJing is more of a pastime, many DJs still practice the craft with a more modern approach.

Mobile DJs are some of the hardest-working DJs on the planet.

Whether it’s corporate events on the 11th floor, a community BBQ in the park, birthday parties, or a wedding at the beach, mobile DJs are called on to provide music and entertainment for various events.

The mobile side of DJing refers to the hauling of their DJ equipment for their own gigs. While some DJs can play on existing sound systems and equipment installed in bars or clubs, most mobile DJs provide their own.

A mobile DJ is also expected to play for longer amounts of time. Four or five hours is a standard gig timeframe for private events or weddings. Mobile DJs also work hard to play to their crowd, and they’re also usually holding down MC duties as well.

The songs may not change often, as so many parties are looking for the same songs they’ve heard and danced to in the past. However, crowds love familiarity, and a good mobile DJ will use this to their advantage.

So, if you’re thinking about becoming a mobile DJ, or switching from one of the others on the list, just be prepared to travel a lot and MC most events you DJ.

Radio DJs are the original DJ. In the early days of radio, the disc jockey was responsible for keeping music and entertainment happening.

Through the 40s and 50s, radio disc jockeys were responsible for breaking or introducing new records on their radio station. Artists would send their vinyl 45s to the radio station in the hopes of getting a spin from a well-known DJ.

Moving into the 80s and 90s, radio DJs introduced us to genres like House, Techno, and Hip-Hop. For many, the radio was the only outlet for new music, and weekly radio shows were not to be missed.

Modern radio disc jockeys still broadcast music over the airwaves. Radio, as a format, has changed quite a bit over the last decade or so, but satellite radio stations still require DJs, to an extent.

Many of them regularly perform on syndicated radio shows, which are pre-recorded and represent various pop music genres.

Still, in major cities like New York, Chicago, and London, radio DJs are getting busy like they always have. New music flows through radio DJs, and the importance of the new music pipeline keeps radio DJs in the business.

The club DJ is probably the best-known of the bunch. As the name implies, club DJs perform at clubs and bars.

Often as an open format DJ, who plays a mix of modern pop and dance music, club DJs are there to keep people dancing and buying drinks. Nightlife hubs like Las Vegas and LA usually feature a resident DJ and traveling club DJs doing their weekend stints.

An aspiring club or bar DJ often exhibits many of the same traits in their DJ set as the four other types of DJs we’ve discussed. A little production knowledge may help create a unique remix of an already hot song, and adding a few scratches or beat juggles also hypes up a crowd.

Some club DJs also spend a decent amount of their time MCing and interacting with the crowd, and they’re also always on the lookout for hot new records to play. A solid crowd reaction may be the first step to a song becoming a hit, so you can thank club DJs for that.

The DJ plays a vital role in their crowds’ overall engagement and energy. The venues and equipment may change, but the goal is always the same; to keep the audience entertained.

Working as a DJ can be an engrossing career, and as we’ve just seen, there are more than a few different types of DJ careers to choose from. So, build your music catalog, develop your strengths and style, and flex your creative spirit.